Virtual influencers attract more viewers than real-life influencers. Masses of people follow these online personalities and the accounts generate a lot of engagement in the form of likes, comments and shares. Is this the future knocking on the door? In this blog you'll read about all the ins and outs of virtual influencers and where this could be heading in the near future!

What exactly is a virtual influencer?

A virtual influencer is a computer-generated person with a human personality and realistic or unrealistic characteristics. They are shaking up the world of influencer marketing quite a bit with their online presence. More and more virtual influencers are added every week. At the same time, more and more brands want to collaborate with this new online cult. This form of futuristic marketing is hot and several brands want to associate with it.

Is this new? Somewhat. In a rewind to 2007, the hologram Hatsune Miku was already on the rise to take over the world. She has been performing live at concerts for years through a specially coated glass screen. Hatsune Miku enjoys worldwide fame, particularly in the anime world. The software used for Hatsune Miku can be purchased. Hatsune Miku is for everyone and everyone can unleash their own creativity on the concept. This also makes her feel "real" because she is the "living" product of an active community.

Back to virtual influencers: There are in fact differences with Hatsune Miku. For example, there is not yet a - successful - concept that mixes virtual influencers with meetings in the real-world. Even though it may seem like it, considering Bella Hadid and Lil’ Miquela kissed in a Calvin Klein ad. In addition, Hatsune Miku is clearly a fake, where some virtual influencers are almost indistinguishable from real people. Also, behind most virtual influencers is only one person, whose identity is often unknown, rather than an entire community using widespread software.

Virtual influencers as we know them on Instagram are unique and actually do the same thing as "normal influencers. As far as technology goes, virtual influencers are virtually 100% manufacturable. No wonder companies love to collab. They can do anything, say anything and go anywhere. People also like to interact with these virtual influencers. They talk about how they used to be bullied or share stories about moments when they had a hard time. The bond between viewer and influencer goes deep and is meaningful. Covid? Not a problem if you are virtual.

Example of a virtual influencer

Lil Miquela, "born" in 2016 is a good example of an archetype virtual influencer. She now has an Instagram following of over 3 million. She speaks out on social issues, chats with celebrities and collaborates with brands. Computer-generated models undergo a digital transformation from niche avatar to mass market relatable and inspirational influencer.

Miquela's celebrity status is taking even bigger forms. For example, she launched her own clothing and jewelry line, released songs on Spotify and she was featured on the front cover of the New York Times Magazine. Miquela's growing popularity drew Prada's interest in a collab.

Are virtual influencers the future?

Virtual influencers show us that we can generate sympathy for fictional persons. As long as they possess human characteristics. The same applies to Harry Potter, Spiderman and James Bond. Countless doors are opening for brands. The creative freedom in using virtual influencers is almost overwhelming. Virtual influencers allow brands to connect deeply with consumers while having complete control over the statements the influencers make. Something that is different with unpredictable human influencers.

How do brands use virtual influencers?

It is often the luxury fashion houses that take the first step. Dior, Balenciaga and OUAI, for example, have already entered into partnerships with upcoming virtual stars. Innovative brands themselves are betting on virtual influencers by creating one themselves. Like Kenzo who developed its own digital avatar, called Knola, or Liv, the virtual ambassador of car manufacturer Renault. We ourselves are impressed by the virtual hipster version of The Colonel, from KFC, who also does collabs with e.g. Dr Pepper. 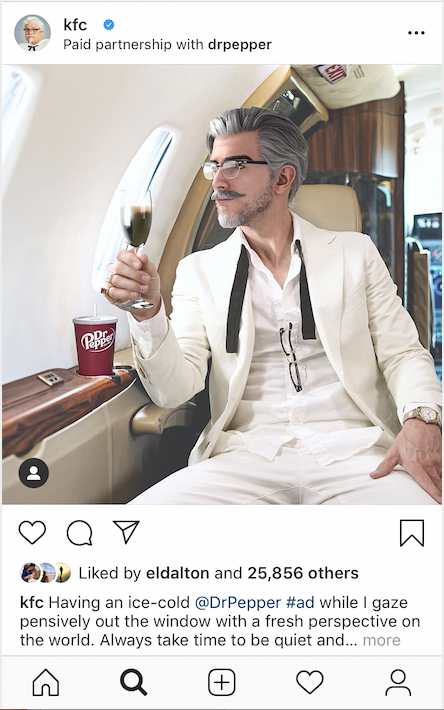 Brands that position themselves as early adopters would do well to employ a virtual influencer. For example, Knola of the Kenzo brand is a digital personification of the brand's creative vision and values. As a brand, you have a lot of control over what the influencer will look like, what personality they have and how the brand message will be communicated.

During the SS15 fashion show, the movements of a real person backstage in Knola were mirrored in real time. In addition, she spoke in four languages - Chinese, Japanese, English and French - about the importance of ecological awareness. Something that is also happening among genuinfluencers.

Virtual ambassador Liv also contributes to Renault's positioning as a pioneer in new technologies. A tough move since driving is an inherently human experience. At the same time, it fits well with Renault's raison d'être. They have always made cars that fit in with people's everyday lives, but at the same time want to offer an extraordinary experience. With passion for life.

Do you take advantage of all your opportunities on social media?

WHO effectively reaches their target audience with a virtual influencer

The World Health Organization faced a challenge: how to communicate to Millennials and Gen Z who barely read newspapers or watch TV? The goal was to provide these generations with accurate information during the corona crisis. Knox Frost, a virtual influencer with a large following helps with providing donations, social distancing, regular hand washing and other best practices to keep the coronavirus out. WHO is betting heavily on social media to effectively reach younger audiences and the move to a virtual influencer fits well into the new strategy.

Want to know how to use virtual influencers for your brand?

Virtual influencers are - especially in light of the metaverse - super interesting. Reaching and engaging young people in their own world. We see a great future for brands and their own virtual influencers. We have developed a concept that not only makes this possible, but also involves your target group. Want to know more? Let's do coffee!

How can we help you?

Fill in the contact form, call or email us!