You wanted to be an astronaut, rock star or president when you grew up; kids today want a job as a social media star. If given the chance, 54% of 18-34 year olds would like to become an influencer (although in America). And many of them are making a good attempt. After all, as a smaller influencer, you are only one viral post away from having your own fan base.

But there’s no need to be a huge influencer. Smaller influencers, or micro-influencers, are the way to go. Hear us out. Since 2017, they have been praised for their close-knit and active community. Depending on your goals as a brand, you may have to forget about big influencers for a while. Micro-influencers have a following of about 10K to 25K and serve a particular niche. Hello, relevance! In this blog, we'll tell you why and how to make excellent use of micro-influencers in your marketing strategy. Let's go!

Are the micro-influencers operating in the same niche as your business? Then you've got the holy trinity of influencer marketing, right there. Brand > influencer > fan base.

The micro-influencers are your ideal customer, so to speak, which means that a collaboration will be credible and effective.

Micro-influencers are excellent for your business because they:

What does that mean in concrete terms? Micro-influencers have an active community in which many ideas are shared in an open and friendly way. The community resonates with the influencer and views the world in more or less the same way. There is no room for negativity or internet trolls. The following appreciates the sincerity of the micro-influencer and is therefore more likely to take action. It is as if a good friend personally recommends the products from their own experience.

A big influencer may have a large reach, beautiful content and bring a high level of inspiration but... the engagement of the fans is usually lower than that of micro-influencers. If you want to be close to your target group, you’re better off with micro-influencer. Entering a partnership with suitable, credible and inspirational endorsers: which brand doesn’t want that? Large influencers are more appropriate at the beginning of the marketing funnel (Awareness), whereas smaller influencers come in more at the end (Conversion).

The smaller the influencer, the bigger the impact. But there's more... 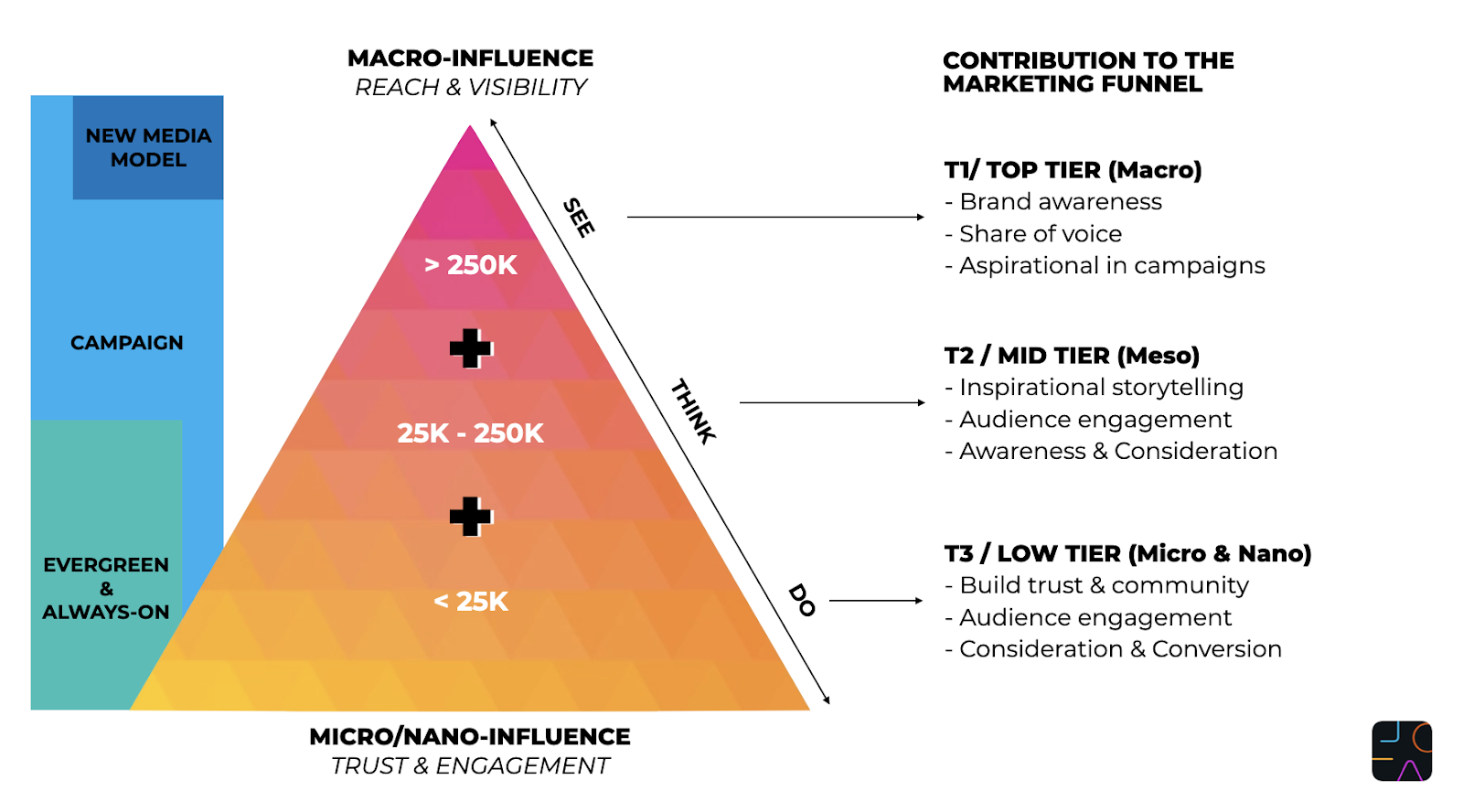 The price tag. If you'd like to purchase a series of posts from a major influencer, keep in mind that there will be a hefty fee. Costs for big influencers can be quite high. Do you want to start with an always-on program? Then keep the role of the macro-influencers limited.

Availability. The demand for partnerships increases exponentially as follower numbers rise. Availability of macro-influencers is really something to consider. As is exclusivity. Fortunately, combined with micro-influencers, the supply is robust.

Authenticity. Once an influencer grows in popularity, more brands want to work with them. However, many paid collaborations negate the authenticity of the influencer. The more sponsored posts the influencer has, the more suspicious the audience becomes.

Although influencer marketing is now mature, not every influencer deals selectively with the brands that offer themselves. As a brand, you can be one step ahead by researching the amount of sponsored posts and only engaging influencers who truly fit your business and objective. We call this 'saturation rate'.

Do wonder if there are more opportunities ahead for your social media?

Request a social scan [Dutch only] and our social specialists are happy to help!

How do you use micro-influencers in your strategy?

Look for the collaboration. Because they have a smaller following, the demand for collaborations with micro-influencers is typically smaller. There is much more choice and their motivation to collaborate is therefore greater.

However, without the right tools it is difficult to see if someone has an authentic following (read: hasn't bought any followers). If you really operate in a niche market, the perfect influencer can be hard to find. And there are more tips & tricks to make sure you find the right influencers, create the right content and use the right tactics.

Want to know how and which micro-influencers you can use for your brand?

Then get in touch with us!

What does it cost to have a website made?

How can we help you?

Fill in the contact form, call or email us!